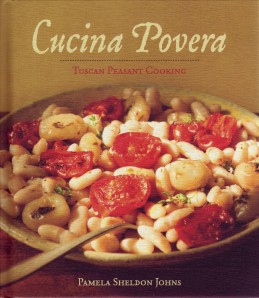 We’ve had a small earthquake this week and are facing down Hurricane/Tropical Storm Irene this weekend. I’ve checked the flashlight batteries, and charged up the laptop and cell phone, but I refuse to rush to the supermarket and stock up madly on whatever I can pull off the bare shelves.

Ok, I did pick up some eggs and chicken, because there was absolutely no protein in the house, and I cut some greens and celery from the garden at work. But I kind of like rummaging through the pantry and seeing what I can concoct from what’s on hand.

Pamela Sheldon John’s recipe for Aquacotta—cooked water—is a perfect for what’s on hand, a few garden cuttings, an egg, and a heel of stale bread. This bread, onion, and greens soup is simmered together, seemingly out of nothing, into a savory and fresh bowl of soup, fortified with bread and enriched with a poached egg.

I like the feeling of accomplishment that comes from knowing you’ve made a delicious meal out of what others might ignore or even toss away. And that’s the essence of cucina povera—making something from nothing. But more than something, many of these cucina povera dishes, like polenta, panzanella, and ribollita have become iconic.

Sheldon Johns describes how this style of cooking developed out of the land and politics. The typical Tuscan bread is unsalted because for many years salt was heavily taxed. Accordingly, it dried out quickly and led to dishes that used soaked bread or breadcrumbs. There aren’t a lot of particular breakfast dishes, because breakfast was a bit of that dried bread soaked in wine or leftovers from the night before. Seasonal eating was the only choice, with food preservation—vin santo, sausages, and salume—a household survival chore.

Local eating was also the only option and before the recipes, Sheldon Johns tours through hill villages and cities to the sea, gathering stories of making it through hard times, often finding the recollection of bitter greens gathered on spring hillsides to be the sweetest memories of all.

You’ll find the recipes simple to cook but very satisfying—the perfect kind of home cooking. And lean isn’t always mean. The book includes rich sauces like Sunday meat sauce or on a good hunting day, Penne al Sugo di Lepre, pasta with rabbit sauce. The simple desserts are lightly sweetened and include business-like little cookies like Brutti ma Buoni (ugly but good) and for carnival days, Cenci, fried in a luxury of oil. But as always, the freshest and simplest is often the most luscious, like Fichi allo Virio, fresh figs split and stuffed with a wedge of gorgonzola and a walnut half.

So whether or not you’re facing a natural disaster, consider treating your kitchen a bit more rigorously. Cooking and eating just what you have or need can be it’s own kind of luxury.