The Great American Cookbook (and How America Ate)

Posted on September 20, 2011 by Appetite for Books

I first learned of Clementine Paddleford from Kelly Alexander’s Saveur magazine article, a piece that made her sound so appealing and charming that I jumped online to buy a copy of her long out-of-print book, How America Eats, an assemblage of recipes from cooks and communities around the country. 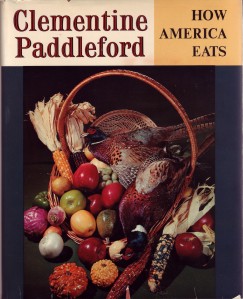 The original, in its kodachrome glory

In prose that used to be called “breezy,” under punning headlines “Lobster is the Maine Thing,” Clementine Paddleford traveled across the country interviewing local ladies club members, home economists, and distaff journalists about what they cooked.

Illustrated with a Kodachrome cornucopia, the recipes, gathered between 1948 and 1960 are delightfully local and definitely pre-foodie.

There’s a little bit of the frilly apron kind of recipes—Mock Cherry Pie or Pink Rice, but most of the dish are real cooking and real local—Croquignolles and Calas in New Orleans, Sweet and Sour Beans in Pennsylvania, Johnnycake in Rhode Island, Pear Pickles from Minnesota, and Game Sauerbratuen from a Colorado ranch.

These were recipes from women who took cooking as their given work not as a chore or an accomplishment. They knew their way around the kitchen and were glad for a shortcut. Alexander, the instigator and editor of this reprint, was beguiled by Paddleford’s intrepid storytelling through recipes and took as her challenge to update the recipes for contemporary cooks who are not so anxious to use convenience products like bouillon cubes or canned soup, but still need guidance with technique. All the while maintaining Paddleford’s enthusiastic voice.

Those recipes, which sound so common today, were in fact first published by Paddleford, the first step in making them national icons.  As Molly O’Neill writes in her introduction, “She drew the map of American regional cooking that the rest of us are still following,” including Jane and Michael Stern, Guy Fieri, Anthony Bourdain, Alton Brown, and O’Neill herself.

As for that voice, in sorting through the original to put together a useful reprint, Alexander found only one recipe for green salad and 38 cookie recipes. Even a quick flip through will reveal a breadth of molasses and ginger cookies and plenty of German-style Christmas cookies. 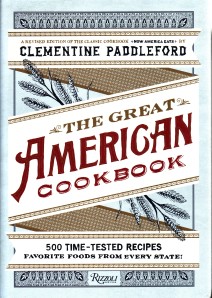 Paddleford “was an unabashed dessert lover,” but Alexander was determined to make a relevant cookbook, and so kept only the very best pies.

The new version, renamed The Great American Cookbook, is thicker, bringing recipes to the fore, and setting aside Paddleford’s prose in bannered boxes. Alexander tested the recipes so you can trust that a Lumberjack Pie made with beef and pork simmered for two hours (hard to face in our grill everything era) will come out as promised. The ingredients and stories are the same, but Alexander has filled out the directions to less matter-of-fact cooks.

The recipes are so strong that they come over unchanged and many are a delightful blast from the past. The Fried Rice is not the Asian dish that we’ve come to know through authentic cookbooks, but literally, rice fried gently in oil, then briefly steamed for a lush and melting result. It may become your go to method for rice.

One could quibble about renaming of the original book but the new name is accurate, an entrée into great American kitchens.

1 Response to The Great American Cookbook (and How America Ate)