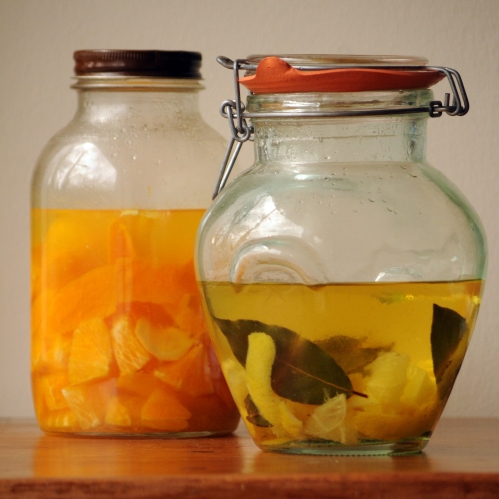 It’s hard to put a single definition on ratafias. Depending on the cook, era, or region, they are made with fruit and wine, fruit and brandy, or fruit juice and brandy. There is even debate over the origin of the name. Some claim it is a Creole word, others say it comes from the Latin, rata fiat (to ratify), in recognition of the shared drink that would seal a ratified treaty, which sounds awfully coincidental. And just to complicate things, many British and early American cookbooks describe ratafias as biscuits, most often an almond cookie, perhaps meant to drink with wine.

In Glorious French Food, James Peterson writes that liqueurs are made with herbs, nuts and spices; fruits a l’eau de vie are alcohol-preserved fruits, and ratafias are sweetened and steeped fruit. He also notes that French recipes for flavored alcohols date back to the sixteenth century.

In what is considered the earliest American cookbook, The Virginia House-wife, Mary Randolph includes ratafias flavored with currants, rose leaves, ginger, and hydromel (honey) in her chapter of recipes for soaps and beers, part of a well-stocked pantry. In her 1864 book, The Complete Confectioner, Philadelphia author Eleanor Parkinson describes ratafias as “liquors made by the infusion of the ingredients in spirits, and are similarly composed to the spirituous waters, but instead of being distilled, they are simply filtered, and sugar is added to them.”

Ratafias seems to be most strongly a French tradition. Mirielle Johnson, in Cuisine of the Sun, calls them Boissons de Menage—household liquors. She recalls how they are used as gentle restoratives, prescribed for everything from growing pains to spring fever. In From My Chateau Kitchen, Anne Willan records the ratafias and eau de vie made by her neighbors, shared at the table and as gifts. She points out that most ratafia is white, and in her community, made stronger with marc or brandy. “Most wine and cider growers in Burgundy make a bit of ratafia for home consumption. The concept is simple: Mix enough marc or other distilled alcohol with fresh fruit juice to keep the juice from fermenting, then leave it to mature for six months or so.”

It is Parkinson’s definition that goes right to why these are perfect for household production–simple infusion. Her flavor recommendations include cherries, orange flower water, noyaux (nuts—usually green walnuts), clove pinks, and angelica. And while the perfume of a single, seasonal fruit can be captured in a ratafia, intriguing combinations include pear, persimmons, and cloves; figs and rosemary; fennel, saffron, and orange; nectarine and lemon balm; grapes and celery; or fig and cardamom. Consider herbs as well, parsley, mint, basil, anise, can add dimension to ratafia, just as they do in cooking.

• Use red or white wine, to complement the flavorings to your taste. • Mix and steep the ratafia in a large, wide-mouth glass jar. • Don’t replace the length of split vanilla bean with liquid extract, and use the vanilla bean sparingly. You want it to mellow the fruit essence without overpowering it. • After the alcohol and fruit have steeped, filter the ratafia and decant it into clean bottles. Try to find the ones with a metal lock and rubber seal. • Johnson also calls these “liqueurs de fenetre,” windowsill liquors, where they are often put to mellow, but the fridge or a cool closet works as well. Basic recipe: 1-2 cups of cut up fruits, vegetables, herbs ¼ cup white sugar ¼ cup unflavored vodka 1 inch of vanilla bean, split lengthwise 1 750-liter bottle of wine • Mix the ingredients, lightly crushing the fruits, vegetables, or herbs and dissolving the sugar. • Seal and store in the refrigerator, occasionally stirring or agitating the jar, for 3 to 4 weeks. • Filter the liquid through cheesecloth set in a fine sieve and decant the liquor into a sealed bottle.