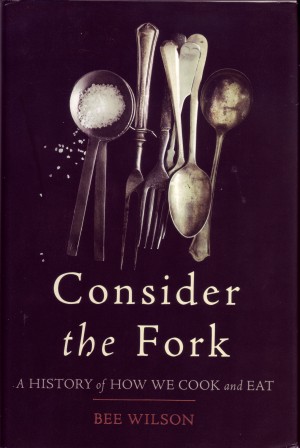 Wilson begins her book by describing the lowly wooden spoon, which, after she explains its technological advantages and cultural place, doesn’t seem quite so lowly.

And that’s her approach to the things we don’t even see anymore, from stoves to coffee grinders. Every tool has a story and Wilson explores those stories in the tools that have won “a place in our hearts and kitchens.”

She makes the point that, Ferran Adria and Nathan Myhrvold notwithstanding, we have always lived in a “technological age.” While our technology is computers, in its time the pot was a tool that changed culture. Once you could make a soft porridge you could survive without the strong teeth needed for chewing spit-cooked meat and fibrous plants.

And pots led to recipes—one of the oldest in Mesopotamian cuneiform—“Assemble all the ingredients in the pot.” From there it’s a short step to Irma Rombauer. Once you had a pot and a recipe, you also had more time to do other things, like pursue a culture.

Most of the tools Wilson describes, from stoves to grinding machines, changed culture by changing the amount of time devoted to prepping and cooking. Though after reading the eight steps a 1912 housewife had to complete to keep her coal stove cooking, you’ll never look askance at your microwave again. Speaking of microwaves, Wilson traces the fears that always accompany a new technology. Coal stoves created noxious fumes and initially, Wilson writes, “servants were scared silly of gas stoves,” convinced they would explode.

She expertly explores literature, archeology, and history to recreate bits and pieces of daily life that explain our attitudes toward cooking and the cultural change that accompanied each new technology. Along with pots and pans, she explores knives, fire, measuring, grinding, eating, ice, and the kitchen itself, each technology capped with an iconic tool—molds for ice cream and knives with a mezzaluna.

But even with tools, we know, and she points out, there is no way to completely emancipate ourselves from the work of cooking. Someone had to bone those chicken breasts and pick the spinach that we microwave in an instant.

When is a tool too much? Perhaps the fork anxiety created by a profusion of flatware or the cluttered kitchen drawers that hide as much as they store. I say its bread machines. Turning over the tactile joy of kneading and shaping to a humming white box takes away the most elemental pleasures of bread.

Look in your kitchen. You know you could get by with a pot, a knife, a bowl, a spoon, and a cutting board, but it’s so much more fun to play with avocado slicers, asparagus steamers, and melon ballers. That profusion of tools and attitude of play is part of our own cultural technology.