It’s Raymond Loewy’s world, we just live in it. He’s the designer who smoothed out the lines of train engines, Greyhound buses, and supermarkets. And he designed the only car I’ve ever lusted after–the Avanti. It’s got a cute little overbite and a perky rear–perfect!

Based on this book, he was not only an excellent designer, but a charming man. His designs never drew attention at the expense of logic, function, or aesthetics.

And because his designs are for everyday life and he examines every detail of that life–from the upholstery pattern on a bus seat to the path through a supermarket–he writes about food, in a haphazard but sprightly way. 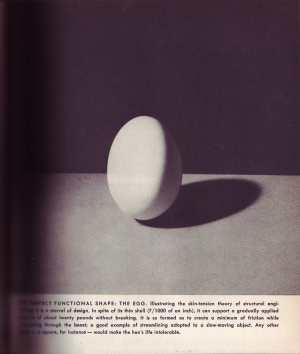 Everything, including food, provides design inspiration

He begins his chapter on American Cooking with the tale of a drunken dog and moves on to the mixed blessings of “cooking parties.” He is particularly wary of male cooks and their special sauces, which, when “poured over any kind of meat, fish, or fowl, the result is invariably foul.”

In the kitchen, as in design, Loewy prefers the “direct and straightforward.” He’s a fan of the “deftly broiled Maine lobster” or “nicely grilled pork chops with apple rings sautéed in butter.”

Loewy is French, so he can’t resist a few digs at a bland American food and mushy American bread (a fair position shared by novelist Henry Miller and culinary historian Karen Hess). But he’s an American as well and appreciates a good slice of apple pie or the special heaven that is strawberry shortcake.  He takes a few swipes at ladies tea rooms and home economists and then wanders off into a disquisition on Art, with a capital A.

While Loewy’s culinary observations may not be groundbreaking, he fundamentally changed our interactions with and expectations of food in his design for post-war supermarkets. Everything we take for granted–easy decisions in a clear navigable market space–were the result of his designs. Products had to adapt and so did our cooking.

food must be stackable

And he leaves us with a final thought on food, Let us open the last part of this book with a silent prayer: May Americans, my countrymen, see the light and never again put mayonnaise over fresh pears.

At this point, I usually insert a modern update, but there really isn’t one hegemonic designer anymore. In our scattered food and consumption landscape, I think of Michael Pollan, who would have us focus on what we’re putting in our mouths and would probably chime in on the importance of good bread. Or maybe Jeff Bezos, who has dematerialized the market and has ambivalent feelings about food trucks.