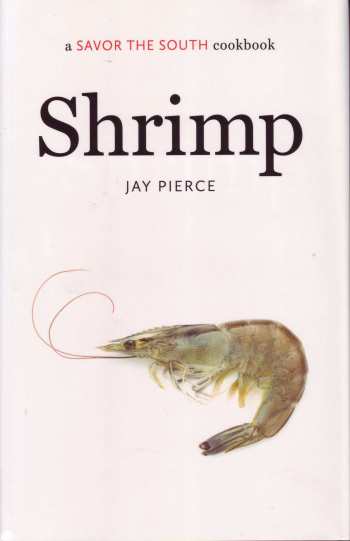 What an idiot man is to believe that abstaining from flesh, and eating fish, which is so much more delicate and delicious, constitutes fasting.

Okay, shrimp are not technically fish, but they are delicate and delicious.

And versatile, as Jay Pierce shows in this book. As he points out–they are equally at home served in an elegant setting complete with linen tablecloths as well as “eaten with bare-hands in sun-drenched locales.” I’m already licking my fingers.

Pierce begins the books with recollections of childhood shrimping trips with his Dad and freezers full of frozen blocks of shrimp–sounds like heaven. He gives guidance on what size to buy, how to tell if they’re fresh, gives you permission to buy frozen shrimp, and encourages you to buy wild-caught, American shrimp.

And while you don’t have to be Southern to love shrimp, there are a few special Southern connections–from a New Orleans étouffée to pickled shrimp, ready at the drop of a cocktail olive. From small plate starters and snacks, in soups and salads, with noodles and rice, and in composed dishes, shrimp shines.

You may want to start with the epitome of mid-century elegance–Shrimp with Cocktail Sauce. But here, Pierce makes it from scratch: shrimp quickly cooked in a vegetable-fresh broth and served with a ketchup-based cocktail sauce goosed with lemon, hot sauce, worcestershire, and horseradish.

Or perhaps a more baroque version inspired by Jacques Imo’s in New Orleans–a Bloody Mary sparked with Creole seasoning, and garnished with lime, pickled okra, and shrimp. Prepare yourself, the recipe calls for 28 ingredients.

But don’t close the book until you try the last recipe–Shrimp and Grits. Pierce notes that this “humble fisherman’s breakfast” has become an emblem of Southern cooking and for good reason. A toothsome stew of smoked pork, onions and shrimp is a blend that deserves your best stone ground grits.

Whether you’re feasting or fasting, put some shrimp on the plate.