Posted on October 1, 2016 by Appetite for Books 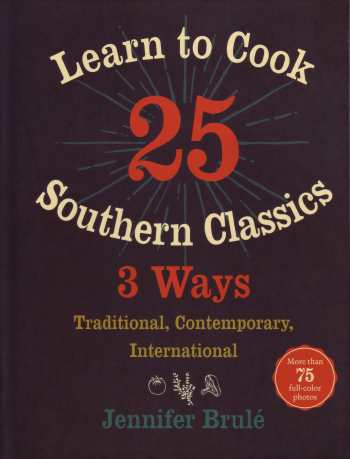 Jennifer Brule was born to write this book. When she was 12, she had such a jones for Velveeta cheese that she lied to her mother, bought a brick, microwaved it and ate it with a spoon.

Since then, her tastes have matured and her horizons have widened. She is grounded in Southern cooking, but life as an expat in Switzerland and England with travels throughout Europe, broadened her culinary horizons.

What the recipes in this book show though is how basic flavors and techniques pop up around the world. You call it shrimp and grits, I call it scampi con polenta–it’s all good.

Naturally, Brule starts with fried chicken, flavored classically with buttermilk and hot sauce, but then made healthier in an oven-fried version, and international with a spicy Mozambican piri-piri sauce.

From there, the recipes runs though meat and fish, including some dreamy vegetable recipes like Fried Okra, Summer Squash Casserole, and Tomato Pie. Homey Southern breads–biscuits, cornbread, and spoon bread–are made international as British Buttermilk Scones, Sopa Paraguaya, and Jambon Persille Spoon Bread. They are updated in a vegan version, enriched with kale, and made lighter.

I spent some time with this book. The recipes just seem to roll out of the kitchen–tomato pie, pimento cheese (I tried the light version–flavored with fish sauce–which was creditable), spoon bread (sharing the plate with fresh sliced tomatoes–a perfect summer supper), and the Classic Coconut Cake (for a convergence of birthdays) which was glamorous and delicious.

The recipes are flexible, reliable, and appealing. If a Classic Sweet Potato Casserole, complete with a brown sugar and pecan streusel is too much, opt for Sweet Potato Oven Fries made savory with Parmesan and cayenne. Or swap out the cream and cheddar from Cheese Grits and go for big flavors with chicken broth, garlic and pecorino. Either way, Brule’s stated goal is to get you in the kitchen and cooking–as she proves, it’s not hard and the results are delicious.