Sure, a kindle is a great thing, but…

I’ve been working on a project that has given me the great privilege and pleasure of researching in the Library of Congress, and I’ve found some interesting food stories about the community where I live. Food is ephemeral–seasonal and meant to disappear. In fact, when it does, the cook takes it as a great complement. But I think some of these memories are too good to disappear.

While the Cabin John Bridge was under construction, one stoneworker’s wife set up to feed the workers. As the longest stone span in the U.S. became a tourist attraction, they established the Cabin John Bridge Hotel. On the menu, circa 1870, was a specialty of the proprietress, Rosa Bobinger: “Maryland Fried Chicken is fried chicken in a white cream sauce with curled strips of bacon on top. The dish, said to have originated at the Hotel, was advertised as ‘fried spring chicken, Cabin John Style.’”

The food was the main drawing card. Noted the Washington Post: “…one could also go out the Conduit Road for breakfast or dinner at Cabin John, one of Washington’s established amusements, which every visitor to the Nation’s Capitol [sic] puts on his sightseeing programme…”.

Dinners were served on custom ironstone dinnerware printed with an image of the bridge in the center of the plate. The hotel and its dining room reached its peak of popularity between 1895 and 1907, and was visited by presidents Roosevelt, Taft, and Wilson. It was eventually displaced by other hotels and amusements along Rock Creek and closed in 1925. It burned in April 1931, arson suspected. 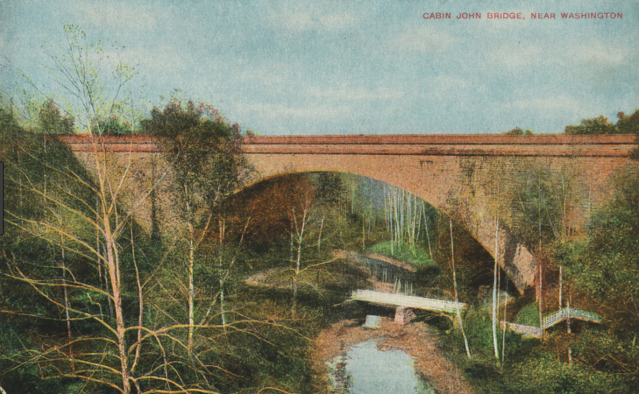